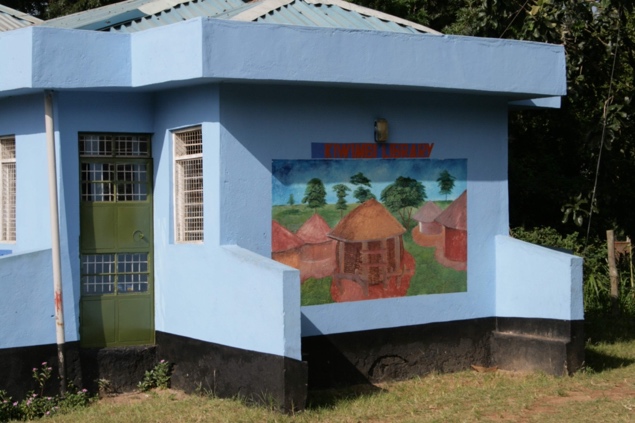 Are you familiar with the image of a traditional Kenyan granary?

Hosea Otulia, a Kenyan artist and Kiwimbi’s art instructor, has painted over 500 images of these food storage structures, including one featured in a beautiful mural on the side of the Kiwimbi Library and Community Centre in rural Western Kenya.

Hosea teaches the children at Kiwimbi drawing and painting lessons, while teaching the history and role of the granary in food security.

In his article about seed-savers, Dan Kiprop describes a granary as a round, structure about 8ft high, raised 1 meter above the ground with walls.  The roof is conical in shape and it is built using locally available materials such as grass, poles, rafters, mud, cow dung and ash.

What you might not know is the importance of these structures in traditional rural Kenyan life. Dan Kiprop further explains that. 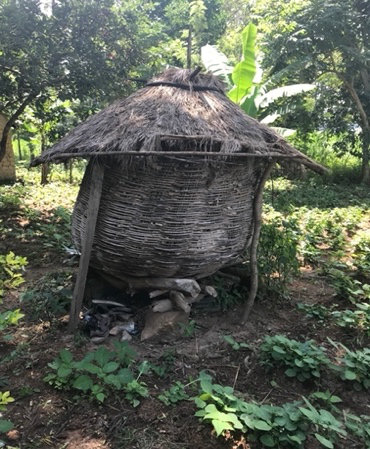 Traditionally the granary is revered by Kenyan communities and considered an important structure for every homestead. The granary is a representation of a farmer’s strength and wealth, as it indicates that a farmer is hardworking and can provide food and security for the family.  In contrast, an empty granary signifies laziness.  The granary is also advantageous to any man who wants to marry, as a full granary demonstrates his hard work and intent to provide for his family.

Just this year, The Standard shared the story of a granary that was presented by a man as a wedding gift to his wife in 1943, was named as a national monument and has been placed under the care of The National Museums of Kenya.

The use of granaries is being replaced in ways that might be less successful at accomplishing the task of quality food storage, including plastic shopping bags, sheds and poorly built granaries that lack traditional techniques and craftmanship. According to AfricaFarmBiz.com, these methods aren’t as successful at keeping pests out so farmers tend to add extra pesticides to the harvested grains, in turn making them less healthy for consumption. In an effort to counter this and offer a better solution, hermetic bags which keep both pests and moisture out have been developed and introduced to the local farmers.

At Kiwimbi, Hosea teaches children the symbolism and source of pride of granaries in African communities and that historically, having a consistent supply of food guaranteed control over one’s destiny. He has the wish to see a granary in every home once again.

Perhaps through the teaching he is doing at Kiwimbi’s Library and Community Centre, his wish will come true.

Just fill in your email address below and click the button to join the mailing list for our newsletter, typically published twice a month. Don't worry ~ we do not sell our information to anyone and unsubscribing is easy!

What Good Can Your Gift Do?